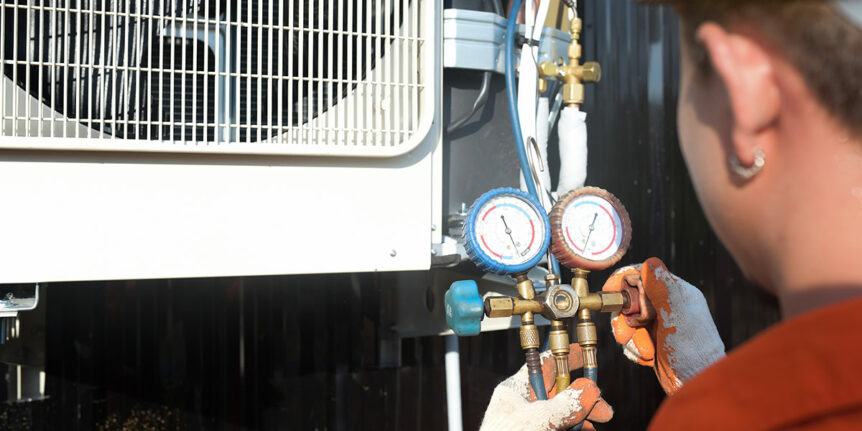 Recently passed California and Federal climate regulations are aiming to curb global warming by reducing the impact of HFC refrigerants. While these regulations will not immediately impact existing refrigeration and HVAC systems, they will have the potential to impact choices for new equipment and retrofits in the coming years.

Many refrigerants, including the currently common class of Hydrofluorocarbons (or HFCs), are potent greenhouse gases. Refrigerants are classified by their Global Warming Potential (GWP), a metric that compares the total contribution of a given mass of the refrigerant gas to an equivalent mass of CO2. HFCs generally have high GWPs, and many commonly used refrigerants have GWPs in the range of 1,500 to 2,000. R-22 for example, has a GWP of 1,800, meaning that one pound of R-22 in the atmosphere is equivalent to almost one ton of CO2. While refrigerant systems are not intentionally vented to atmosphere, since industrial refrigeration systems frequently require charges of hundreds of pounds of refrigerant, a leaky refrigerant system can have an immense impact on global warming.

What you need to know:

At the federal level, the American Innovation and Manufacturing (AIM) Act does not set any specific targets or regulations for refrigerants. It does, however, set targets for overall HFC use reduction, and authorizes the EPA to phase down HFC production and consumption by restricting HFC use on a per-sector basis, and setting standards for servicing and reclamation of refrigerants. Any implemented restrictions on HFC use would apply to new equipment only, so existing refrigerant systems will be able to remain in use, and will likely be able to be maintained in the near term, using existing stocks of refrigerant, or refrigerants recovered from other existing systems.

At the state level, the California Air Resources Board (CARB) has been given similar authority to the EPA, but has announced a first round of regulations. Starting in 2022, new refrigerant systems requiring more than 50 lbs of refrigerant (primarily industrial and supermarket refrigeration systems) will be required to use refrigerants with a GWP of 150 or less. This will likely result in an increase of in the use of natural refrigerants in new systems. For example, ammonia, which is already a common industrial refrigerant and has been gaining popularity in supermarket systems, has a GWP of close to 0. Additionally, grocery store chains with 20 or more stores will be required to meet standards for existing stores, though these requirements are more lenient than the requirements for new systems. Chains will be required to maintain a weighted average GWP of 2,500 or less by 2026, reduced to an average GWP of 1,400 by 2030. These GWP values will allow existing systems using many common HFCs to be maintained, at least in the near term.

For home and commercial HVAC systems, a GWP limit of 750 will be put into place. This limit will go into effect starting in 2023 for room air conditioners and dehumidifiers, while larger stationary systems such as package units and split-systems will have until 2025 to meet the requirement. This difference is because many of the current refrigerants that meet these requirements are classified as “A2L,” or mildly flammable, and current building codes do not allow for the larger charges required for stationary systems.

We use cookies on our website to give you the most relevant experience by remembering your preferences and repeat visits. By clicking “Accept All”, you consent to the use of ALL the cookies. However, you may visit "Cookie Settings" to provide a controlled consent.
Cookie SettingsAccept All
Manage consent

This website uses cookies to improve your experience while you navigate through the website. Out of these, the cookies that are categorized as necessary are stored on your browser as they are essential for the working of basic functionalities of the website. We also use third-party cookies that help us analyze and understand how you use this website. These cookies will be stored in your browser only with your consent. You also have the option to opt-out of these cookies. But opting out of some of these cookies may affect your browsing experience.
Necessary Always Enabled
Necessary cookies are absolutely essential for the website to function properly. These cookies ensure basic functionalities and security features of the website, anonymously.
Functional
Functional cookies help to perform certain functionalities like sharing the content of the website on social media platforms, collect feedbacks, and other third-party features.
Performance
Performance cookies are used to understand and analyze the key performance indexes of the website which helps in delivering a better user experience for the visitors.
Analytics
Analytical cookies are used to understand how visitors interact with the website. These cookies help provide information on metrics the number of visitors, bounce rate, traffic source, etc.
Advertisement
Advertisement cookies are used to provide visitors with relevant ads and marketing campaigns. These cookies track visitors across websites and collect information to provide customized ads.
Others
Other uncategorized cookies are those that are being analyzed and have not been classified into a category as yet.
SAVE & ACCEPT