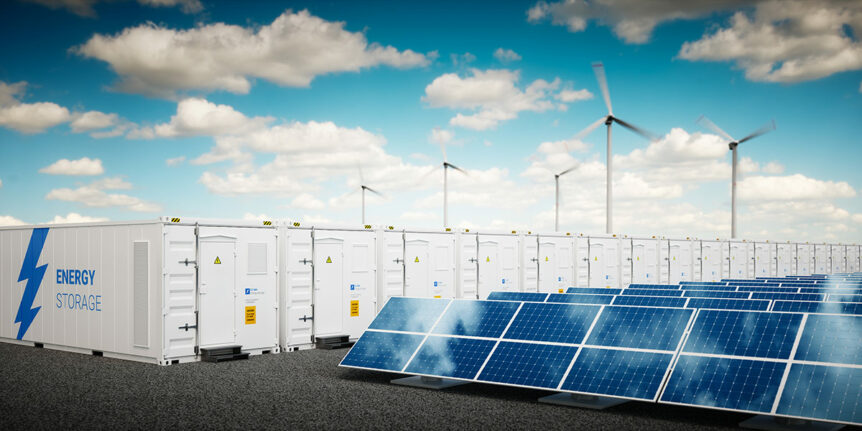 The CPUC recently approved one of the largest utility-scale battery storage installations in the country, in an effort to improve grid resiliency. The approval came in the wake of rolling blackouts resulting from a historic heatwave, as traditional power plants were unable to keep up with demand. The newly approved battery capacity, totaling 1.2 gigawatts, will be able to charge during the day using excess energy produced by solar farms, and discharge during the evening as demand increases and solar production falls. This additional capacity aims to avoid future rolling blackouts like the ones experienced in early August.

While utility-scale battery installations aim to avoid blackouts due to insufficient energy supply, a building-scale battery-solar installation can help reduce your utility bills even further than either system alone. While the scale is smaller, the principle is similar: rooftop solar panels charge a battery system, which can then discharge to reduce demand spikes from large equipment starting up, or shift consumption from the grid to times when rates are lower. The combination of battery storage and solar allows solar-generated energy to be used even when the sun is not shining. A sufficiently sized battery even keeps your essential systems powered during a grid outage. ERI can provide a solar-battery feasibility assessment, including monthly generation with Time of Use assessment, economics, utility rate analysis, and utility cost savings.

An example of a smaller-scale behind the meter storage solutions is at Pleasanton Unified School District (PUSD). The district recently installed solar carport canopies and battery storage at Amador Valley High School. The system can generate over 1 MW of energy, with a battery energy storage system of 660 kWh. This system offsets 97% of the school’s electricity use and the battery storage system provides protection against future time-of-use rate increases. Overall, the project is projected to save PUSD more than $2.2 million over the 25-year expected useful life of the project.

We use cookies on our website to give you the most relevant experience by remembering your preferences and repeat visits. By clicking “Accept All”, you consent to the use of ALL the cookies. However, you may visit "Cookie Settings" to provide a controlled consent.
Cookie SettingsAccept All
Manage consent

This website uses cookies to improve your experience while you navigate through the website. Out of these, the cookies that are categorized as necessary are stored on your browser as they are essential for the working of basic functionalities of the website. We also use third-party cookies that help us analyze and understand how you use this website. These cookies will be stored in your browser only with your consent. You also have the option to opt-out of these cookies. But opting out of some of these cookies may affect your browsing experience.
Necessary Always Enabled
Necessary cookies are absolutely essential for the website to function properly. These cookies ensure basic functionalities and security features of the website, anonymously.
Functional
Functional cookies help to perform certain functionalities like sharing the content of the website on social media platforms, collect feedbacks, and other third-party features.
Performance
Performance cookies are used to understand and analyze the key performance indexes of the website which helps in delivering a better user experience for the visitors.
Analytics
Analytical cookies are used to understand how visitors interact with the website. These cookies help provide information on metrics the number of visitors, bounce rate, traffic source, etc.
Advertisement
Advertisement cookies are used to provide visitors with relevant ads and marketing campaigns. These cookies track visitors across websites and collect information to provide customized ads.
Others
Other uncategorized cookies are those that are being analyzed and have not been classified into a category as yet.
SAVE & ACCEPT